Slightly off topic for this blog but there’s been a lot about feminism in the news recently, mostly connected to the 100th anniversary of the death of suffragette Emily Davison, killed while she was trying to tie a ‘votes for women’ scarf to the King’s horse during the Epsom Derby.

I suppose I am a feminist, in that I believe that things should be fair and equal.  But, to be honest, I do feel that the pop stars of today have been rather letting the side down in recent weeks by pushing the boundaries of exactly what is appropriate to wear on stage while performing, however empowered you might be feeling.

In other words, Beyonce, Jennifer Lopez et al are making Kylie’s gold hotpants era look positively demure.  I can kind of accept the fact the Adele is the only woman in recent years who has made it to number one while wearing a knee length dress with sleeves, but since when was it essential to dispense with skirt or trousers altogether in order to ensure a chart hit?

To illustrate, I give you Beyonce, performing at the Chime for Change concert a week ago, wearing what looks like a leather leotard – at a concert in aid of global female empowerment.

And then there’s Jennifer Lopez, who upped the stakes by going for a similar style plus hooker boots at the same concert, but topped that with the Hello-and-have-you-met-my-bikini-line look she sported on Britain’s Got Talent the same week. 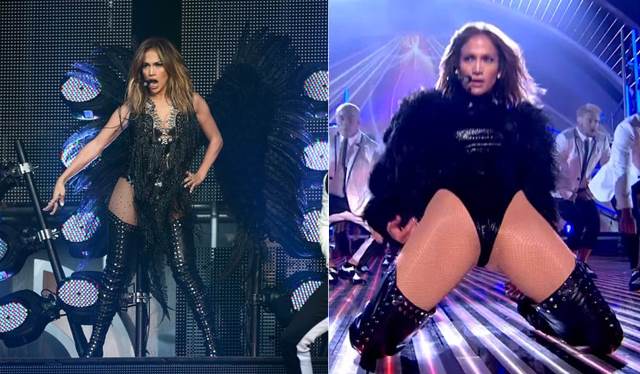 Honestly, sometimes I do wonder what they were thinking.