So I was at un-conference Interesting North in Sheffield yesterday. It was fab.  The premise of the Interesting conferences (normally held in London and organised by Russell Davies, but transplanted to the North by Tim Duckett) is about ‘a day of brilliant people talking about their secret obsessions’.  Basically, it’s about Brain Food that you might not find totally useful right now, but feel much better off for having been introduced to.

All the elements of the previous Interestings were there – bunting, fun badges, a stage, some speakers and an audience armed with cameras and notebooks instead of the usual laptops that normal conference attendees pull out.  I also suspect that most normal conferences don’t involve enough denim to start a rodeo and a lot of people wearing DMs or trainers.

Which was what made the venue of Cutlers Hall such a contrast.  Posh is an understatement, it’s a grade two listed, bling-tastic tardis of a place.  The Main Hall we were in had chandeliers and maple panelling salvaged from the White Star liner Olympic – sister ship of the Titanic.  Even the bloke taking coats was wearing black tie.

As well as the amazing friendly atmosphere and a chance to catch up with blog/twitter mates, the main point of being there was for the talks.  Highlights for me were:

Oh, yeah.  I spoke too, about How Ladies Stay On Sideways (27/01/11 video has just gone up!) .  Seemed to go OK and even though we were running an hour late by then, 95% of the audience were hell-bent on staying until the bitter end.  For all the people who asked me afterwards about where their horsey sister/wife/friend could have side saddle lessons, get in touch with The Side Saddle Association and they’ll send you a list of local instructors.  Or drop me an email (addresses on the right) and I’ll check my members handbook to see who’s near you.

There was also a really good goody bag for everyone.  It must have been good because everyone took theirs with them – I only had to follow the train of people carrying brown bags up the hill to find the post-IntNorth pub.  It even included branded merchandise – Umbro had very kindly donated several hundred t-shirts that should have said ‘we won the world cup’, but for obvious reasons were surplus to requirements and printed with the Interesting North logo instead.

My T-shirt is a unisex large, far too big for me.  If you’d like it, leave a comment below explaining why and I’ll pick the best one.

The other genius thing the organisers did was print the un-conference program in the form of a newspaper (via newspaperclub). 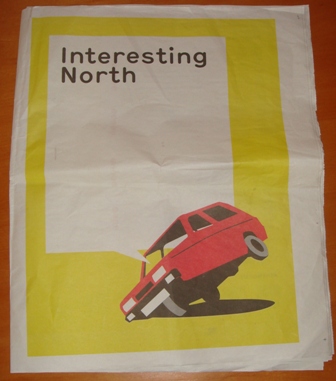 My newspaper looks a bit battered as I was referring to it on and off all day long.  Not only did anyone like me who arrived a bit early have something to read, I really felt I got more out of the talks by understanding a bit more about the speakers.  It’s also easy to find people on t’interweb after an event when someone has handily printed their twitter and url next to a photo of them.

Thanks to Howies and their Dohboy for sponsoring lunch (meaning all the fivers went to the local Archer Project homeless day centre), Technophobia for funding the AV costs, Rattle for paying for the newspaper and Kiosk for the rather marvelous Interesting North identity.  And of course, thanks to Tim, Greg, David, Saul, Aden, Jag, Ian, Erica and Dan who made it all happen.

See you all next year?  Or how about a geographic compromise and we try Interesting Midlands?

9 thoughts on “Interesting North – the report”