I’ve been thinking about the whole online sphere of influence thing recently.  I contributed a chart on the subject a while back to Neil Perkin’s crowdsourced presentation about online communities: 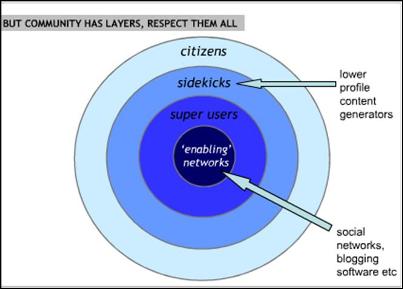 But I now think that it’s actually more complex than that.  There’s a great scene in Studio 60 where the network boss tells the exec producer “you can lose five regular consumers, replace them with one Alpha Consumer and I can charge the same ad rates”.

Like any communications channel, you can have niche blogs with limited reach that are really important if you want to access their particular specialist niche target audience (like digital pathologists).  And then there are other blogs that might also not have a very impressive reach but their audience is made up almost entirely of influential Alpha Consumers, “the first to know, the first to try and the first to buy” (© Aaron Sorkin).

Which means that analysing the reach of campaigns that rely on blogger relations is going to be problematic unless someone out there can find a way to weight the ‘value’ of every single blog and their readers.

One thought on “Blogger relations – are you going after Influential Alphas or Niche Specialists?”