In his column in today’s Campaign, Russell Davies urges us all to avoid too much ‘angry blogging’ – as he puts it “the blogosphere sometimes looks like a digital version of Is It Just Me Or Is Everything Shit?”

But I can’t miss this opportunity to have a really good rant.

In my opinion (and incidentally that of my agency’s Creative-Head-of-Everything too), the new Post Office campaign sucks.  Truly.  I know that Mother certainly won’t agree with me since they made it.  And The Independent and Gavin Gordon-Rogers from Agency Republic in Campaign’s Creative Review both seem to think that its some kind of comedy genius.

I tend to agree more with Russell Ramsey from JWT in the same Creative Review “Forgettable, except for one thing. They all manage to go straight to the counter and get served. There’s no queue.”

This clichéd, tired, badly scripted effort not only fails to get across the ‘we are a much loved national institution and are there for more than just stamps’ message effectively and memorably, it also resorts to bad jokes and celebrity cameos to paper over the cracks.

Maybe there was a brilliant idea in there that got lost in pre testing.  Maybe it was the London agency bubble effect.  Maybe the client wouldn’t be advised by it’s own agency.

Whatever happened, it’s a tramsmash.  And to make things worse, its one that bears absolutely no relation to the sullen staff, grubby environment and ten person deep queues at the Post Office branch round the corner from work. 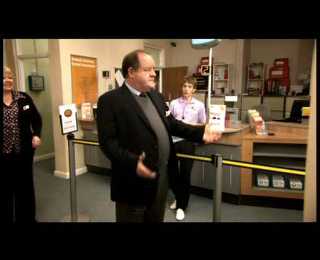