I’m guessing that it was a bloke at The Design Conspiracy who printed my t-shirt as the logo was positioned so that it sat neatly under my boobs, rendering it invisible unless you were less than three feet tall.  Never mind, it was a nice idea…

So, the day itself.  Conway Hall was a perfect venue and like the big brother of The Breakfast Club (spiritual home of Coffee Mornings).

I’m not going to go through every detail or every speech because the other 299 people there are bound to have covered if off, blog-wise and the 500+ pictures in the flickr pool provide a pretty comprehensive record of the day, but I learnt some very interesting things, including:

I saw the editor of The Spectator do a fabulous Al Pacino impression and The Independent’s Rhodri Marsden play a saw like a violin.  And I finally met Beeker as well as making friends with Carol, Claire and Sam.

It was a fantastic day.  The post-lunch Buddhist chanting session wasn’t my cup of tea, but I really enjoyed every other speaker, as well as the general chatting and milling around, the afternoon tea (courtesy of W+K) and the session at the pub afterwards.

There were goodies and freebies galore (badges, books, shaving stuff, a specially-for-interesting mix by Dino & Terry, fruit, smoothies from Innocent) and, more importantly, a real sense of everyone mucking in to make the event a success.

But the abiding memory I’ll take with me is the inscription above the stage at Conway Hall that seemed to sum everything up: 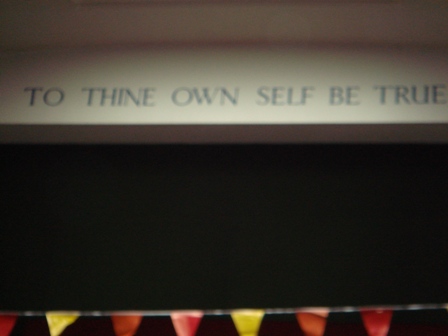